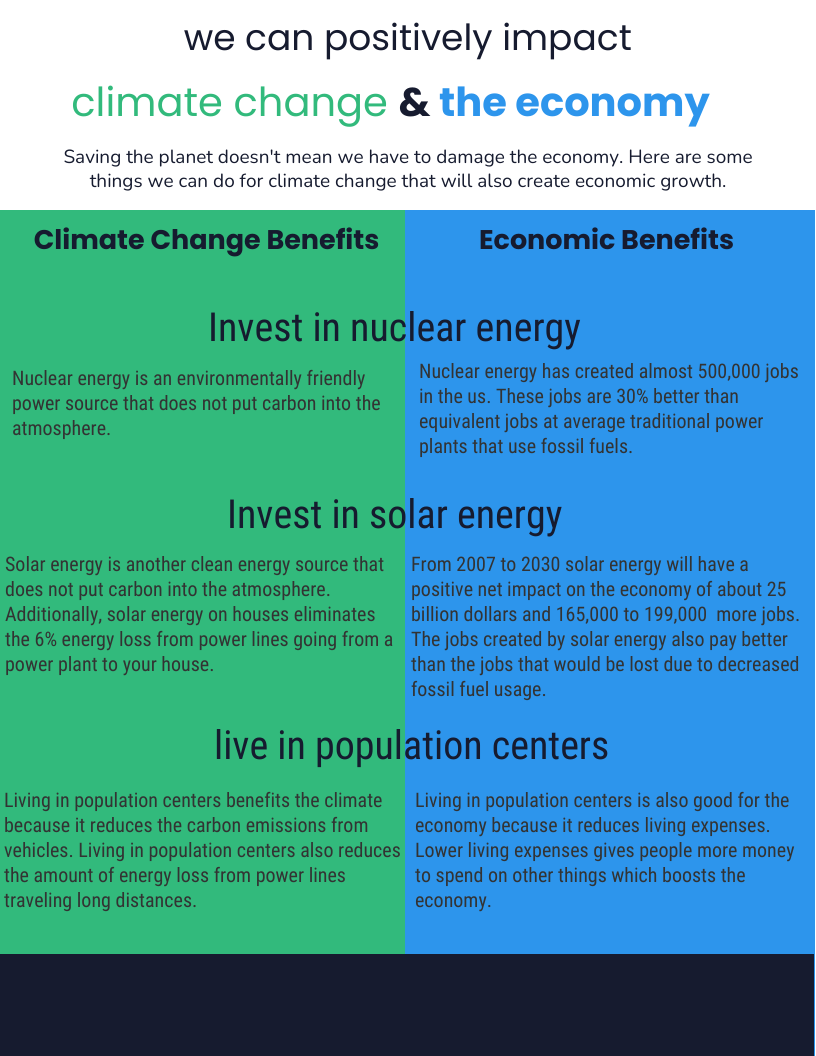 For this project I created an infographic that sowed ways to fight climate change and help the economy at the same time. I chose this for my project because climate change is important to me and i wanted to create something that might help people from different parties agree with one another. I used statistics and data to show how each of the measures I presented woldu bothe fight climate change and grow the economy in hopes that both conservatives and liberals would agree for their own reasons that these measures would be beneficial.

From this project I learned that almost everyone has good reasons behind their opinions and it can be valuable to listen to them even if  you don't agree. In the current state of America it can be very easy to think that your party is right and the other party is wrong, but oftentimes both sides have something to contribute to the solution. I believe that we could accomplish a lot more if we focused on working together with opposing parties rather than focusing on winning the argument.

I also learned how to persuade people better using Rogerian arguments and ethos pathos and logos. Ethos pathos and logos are the base for your argument.  For an argument to be persuasive it needs to be logical and coming from a person that is respected there also needs to be a reason the person cares about the argument. It is also important to present your argument in a way that doesn't make the other person feel attacked. If someone feels that you are telling them they are wrong they are much less likely to want to agree with you.
​
I think that our country would benefit a great deal if everyone would be more open to others opinions. In the current state of the US it is very difficult to get anything done because there are 2 parties and they never seem to agree on anything. While not everyone will ever agree on anything I think that our county would be a better place if everyone, especially politicians, would try to come to the best solution instead of only supporting the things their chosen party agrees with.